!Support for the Hokuyo sensor requires a Notch Pro license.

About the Hokuyo 2D LiDAR device 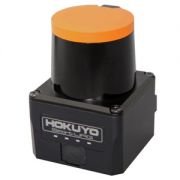 !The Hokuyo sensor requires you to source your own power supply and connect it by stripping wires.

!The Hokuyo sensor utilises a 100Base network link. Please check your network card can support 100Base (some only now support 1000Base or 10000Base).

Details on each of the sensors are available at: https://www.hokuyo-aut.jp/search/single.php?serial=167

Notch connects directly to the Hokuyo sensor, so no middleware or driver software is required. However, various diagnostic software is available for the Hokuyo units – one of the better ones is: URGBenri

Setting up the sensor

Therefore it is easiest to set your network adapter to use the IP address:

!The sensor will only accept one network connection, meaning only one PC/standalone/block/piece of software can talk to the sensor at a time.

Once you’ve added the Hokuyo UST Lidar node, you can see a wireframe visual representation of the sensor and its data by turning on the Bounding Box view. The arrows align as follows to the physical server. (Please note the black notch on the top of the sensor represents the ‘back’ of the sweep – i.e. the dead area).

*When setting up the sensor, it’s useful to see the bounding box view while playing. To do this turn on View->Show Bounding Boxes and Range Finders while Playing.

*The raw sensor data (represented by the blue lines) will only update while playing.

*When initially setting up the Hokuyo node, it’s best not to change the scale.

Setting up the region of interest (bounds)

The sensor returns a set of several thousand sample points per frame, arranged as a continuous circular sweep from the sensor outwards. This data is processed to determine a much smaller set of points of interest, which should correspond to e.g. the hands of a user interacting with the space. This process takes several stages. First, the points are culled by the bounding region. Then the remaining points are joined together into contours, which should represent single objects – e.g. a single contour for one person visible to the sensor. Next, the most relevant points are extracted from the sensor. This looks for points on the contour which are closest to the sensor but also separated from each other by both distance, and angle along the sensor sweep. The resulting points are then merged. In order to achieve some temporal coherence in the point data set, the set of points detected in the current frame are matched to the points in the previous frame. If found, current positions may be smoothed against the previous position to reduce temporal jitter.

Scaling to your visual scene

Toggle which transform channels should be inherited. By default, all are on.

This node outputs a transform array – which may be used directly with a Clone To Transform Array, or to clone other nodes within Field or Particle systems.

Select the bounding box icon below your view port and you should see something like the example below. Notice the green box is the interactive part of the lidar sensor. Nothing outside of the area will have any effect oo the content. However, this can be altered within the bounds attributes of the Hokoyo UST Lidar Array node. Some example project files can be downloaded from here.