The RSS Feed node combs data from an RSS feed from the Internet.

This node searches for data from an RSS feed from the Internet, and generates a table of all the data it finds. This requires an Internet connection to function properly. RSS feeds are commonly used to access data feeds from websites or to comb posts from social media sites - e.g. all posts from an Instagram hashtag. Notch downloads the RSS feed and its associated images in the background, periodically. Once downloaded the feed’s contents may be used by other nodes. For example, the text elements of the RSS feed may be accessed using the RSS Text Selector, displayed using Text nodes or Image Plane nodes; or the images may be accessed as tiles on a single image by connecting the RSS Reed node to an Image Tile File Loader node. Notch’s JavaScript API is also capable of accessing the RSS feed’s data for additional processing.

Without a valid cache directory set the node will be hashed out in red, and won’t function.

RSS feeds may contain a large number of images and take some time to download. Progress of the current download is shown as a percentage via the “Update Progress” parameter. The feed is downloaded in the background while the version that was last completely downloaded is used by nodes for processing. Press the “Update Now” button in order to force the RSS feed to start an immediate update. 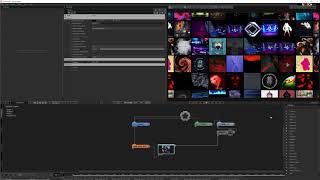