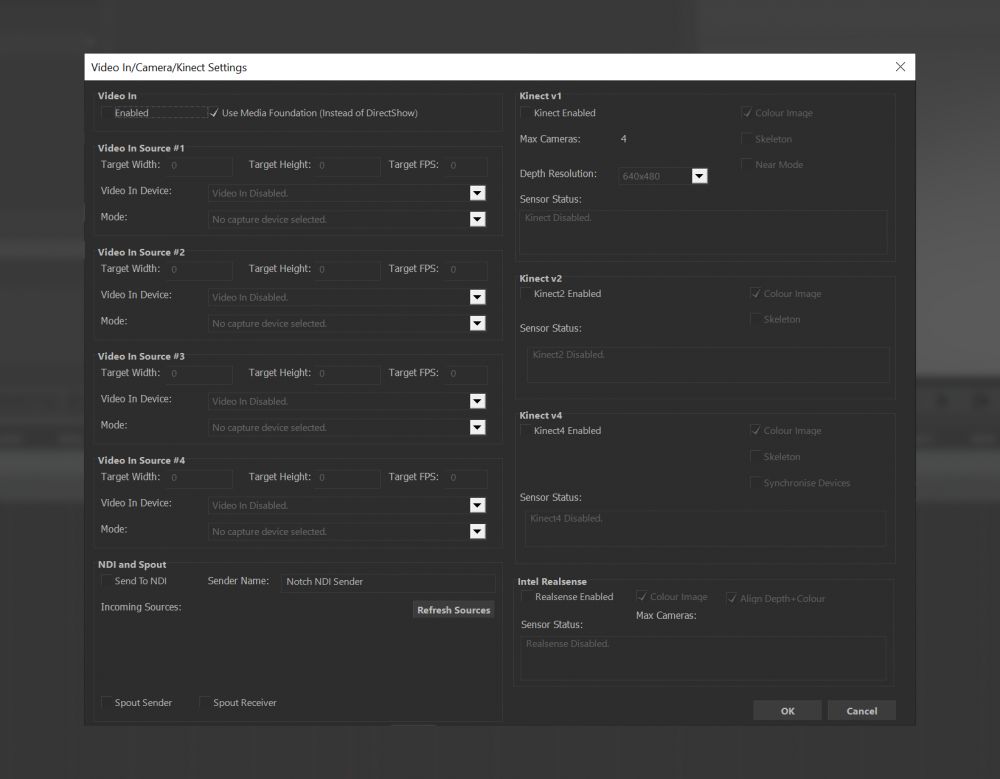 There are multiple ways to bring video capture data into Notch, depending on your scenario.

To configure your Notch Builder project to use a local capture device (for use in Builder or Standalone):

To configure your Notch project to receive video from a media servers capture source:

When your project is exported to a media server, it will now present a hook for the inbound video. For working and previewing in Notch Builder, you can use an imported video in the Video Loader node and the video will be over-ridden at runtime in the media server.

When running in Builder / Standalone Notch supports up to 4 simultaneous input video capture devices/streams. If you need more than 4, you will need to either:

When installing the Datapath drivers, make sure you set the mode to: Kernel Streaming Mode to enable DirectShow usage.

Notch doesn’t show my capture device in the Video In panel. #

Check that you can see the device is showing in other DirectShow/Media Foundation application such as Skype. If the device does not appear in these apps speak to the capture device manufacturer about DirectShow / MediaFoundation compatibility.

Are you sure it supports DirectShow or Media Foundation? If not, it won’t be accessible by Notch. Sadly, many Blackmagic devices sadly do not support these frameworks or do it in a way that’s not according to SDK specs, rendering them unusable in Notch.

First of all, make sure you are using the latest driver for the device in question. Next, add a new value into registry as DWORD 32-bit under: Computer\HKEY_LOCAL_MACHINE\SYSTEM\CurrentControlSet\Services\ProCapture\Pro Capture SDI\Board (x), Channel (z) and set EnableCC to 0. Then, disable/enable the capture card or just reboot your computer to make the new settings take effect.

The image capture is just static in Builder. #

The scene/play head needs to be playing for capture to refresh.