Pre-composite a separate layer as a video source.

This node pre-composites a layer so it can be rendered inside another layer. Any exposed values from inside that layer will also be carried over into the new layer.

Multiple nodes in one scene will rerender that original layer, so make sure to use as few layer precomp nodes as possible and branch out with Video Nulls.

Outputs are an image or video that can be connected to any relevant video input, most commonly an Image 2D node, or a Post FX Node. 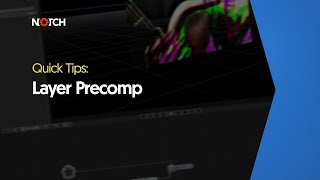